When I was an entertainment lawyer in Los Angeles my life was pretty glamorous, at least on paper. I was married, without kids, Ad Man and I had plenty of time and money on our hands. I wore the finest in lady-lawyer pantsuits. I spent time on movie studio lots, went to premieres and loaned my bathroom key to celebrities in my office. I never could have foreseen what my days would be like 10 years, 2 cities and 2 kids later. I’ve recorded one average day in the life of MommyEnnui below. Brace yourself for the excitement and please keep your hands and arms inside the ride at all times. 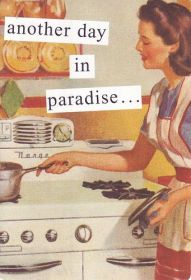 The alarm on my iPhone goes off at 7:30 am because Biggie and Smalls have gymnastics camp this week. Feel the pain of having to get out of bed before I’m damn good and ready and making sure the kids leave the house looking somewhat presentable. Seriously dread the start of the school year which is coming in 2 short weeks. Curse the Atlanta Public School District. Curse my friends in Los Angeles whose children don’t go back to school until after Labor Day. Curse Ad Man just for fun.

Jump in the shower and ignore the fact that my legs are less than silky smooth. No time to shave today. Figure no one’s checking out my legs these days anyway. Quickly blowdry the front of my hair and hope no one notices that the back is still dripping. Contemplate yet again whether I should get my bangs cut or keep growing them out? Bangs or Botox…bangs or Botox? Realize I have to make a decision before my hair appointment first thing tomorrow morning. Know I’ll never actually decide and will let my stylist make the call.

Things I can count on to happen every single day…Smalls throws a fit and cries when getting her hair brushed and I threaten cut her hair short. Biggie realizes she’s forgotten something vital just as we’re pulling out of the driveway. The girls complain that their car seats are too hot, they stage a sit-in under the tree and refuse to enter the car. (I have no doubt they would do this if we lived in Canada.) Envision myself tying them to the bumper and dragging them to gymnastics.

Pick up their neighborhood friend for carpool to camp. Chat with my friend, her mother, who’s rocking a similar “disheveled mom” look as me. Notice that my friend is at least dressed in workout wear. Feel bad for not even pretending today. She mentions her fear of the start of school but remains fairly calm (or at least well-medicated). Full-on freakout mode shouldn’t hit for at least another week at which time we’ll support each other with beer on on the porch and offers to share Xanax. Feel deeply grateful to have found friends who are as neurotic as I am.

On the way to camp, realize that I’ve put my bra on twisted not once, but twice. Hope this isn’t a bad omen for the day.

Go home to blow dry the rest of my hair and brush my teeth. Watch a stupid segment on the ‘Today Show’ with Heidi Klum and Tim Gunn. Feel offended on Tim Gunn’s behalf for this clear waste of his time and talent. Count the days until the new ‘Project Runway’ season starts. Changing of the ‘Today Show’ guard. Think about how much I love Hoda and and would really like for her to find a good man. Wonder how she manages to restrain herself from slapping Kathie Lee Gifford.

Consider folding clothes and cleaning up the kitchen. Decide to get my nails done and write instead. Hop into our crappy, 8 year-old Passat station wagon and drive to the nail salon. Count the numerous very fit, very blonde, stay-at-home moms in workout gear, getting mani/pedis. Think about how no one in this place has any true understanding of the reality of everyday life for 90% of the people in our country. Realize I should hardly be one to judge. Defend myself in my own mind, pointing out to a nonexistent other person that I spent time on Skid Row and produced a documentary on homelessness in LA. Know that nonexistent person would say that doing a documentary about something is nothing like living that experience. Make myself stop having an imaginary conversation with no one.

Go to Starbucks to write. Lunch is an energy bar and an iced green tea. For the 5,000th time, think about how annoying lunch is, occurring in the middle of the day when I’m trying to get stuff done. Such an imposition.

Sit outside to enjoy the gorgeous weather. Take in the blue skies, temperature in the low 80s, and lovely breezes. Realize that not one part of my body is sweating…a rare state indeed. A 50-something year-old woman sits down to share my table and we can’t help overhearing the couple at the next table, who are obviously freshly divorced, argue about who’s going to pay for their kids’ private school. The woman and I eye each other nervously. The bitter couple leaves and my table mate says cheerily, “Man am I glad I’m single!” We chat about the pros and cons of marriage for a bit and she goes on her way. Acknowledge that I’ve had an amusing chance encounter with a stranger. I usually try to avoid those.

Check email. Check Facebook. Start to look at sandals on sale, but stop myself, recognizing the classic signs of a writer procrastinating. Peruse my extensive list of topics to blog about and reject all of them. My brain is too fried to actually craft an essay of any quality, so I decide to spew out a stream-of-consciousness, day-in-the-life kind of thing. Doubt anyone will read it. Write it anyway.

I know it’s time to stop writing when I have to pee. Head to Target because I need a couple things and because the bathroom there is fairly clean and smells like Froot Loops. Feel happy that Target has finally decided to ban guns in its stores so I can discontinue my boycott. Three weeks without Target was a serious sacrifice. That alone should show my dedication to the cause. Spend $96 on nothing. Forget to pee.

Get back in the car and consider the fact that I never once forgot to pee or eat a meal before I had children. Blame them.

Inhale a banana and peanut butter and greet the girls when they’re returned to me from camp. Ask how their day was and get vague and unsatisfying responses. They do, however, insist that I watch them do cartwheels and bridges in the front yard for the next half hour. Suggest they come inside for a snack and watch a TV show. Acknowledge that a better mother would stand outside all day cheering on their impressive gymnastics skills. I am not that mother.

Spend the rest of the afternoon alternately listening to squabbles over whose turn it is to choose a show, reminding Smalls to go to the bathroom, thinking about the fact that I have no plans for dinner and doing nothing about the situation. Pry the girls away from the television and attempt to entice them into taking an early bath in order to avoid an evening drama. Fail in that attempt. Instead, the girls busy themselves by planting land mines of tiny toys with sharp edges all over the house.

Text Ad Man to ask when he’s planning to leave the office. An hour and a half later, when I’ve given up on him and started cooking the girls an inspired meal of macaroni and cheese, raisins, and almonds, finally receive a text back saying he’s going to be late. Think, “No shit” but do not reply. Pour a sizable glass of wine.

Biggie and Smalls beg to take a bath together then spend the entire time fighting over tub toys and who’s taking up more space. Smalls cries and complains during hair washing, because the child apparently has the world’s most sensitive scalp. Plan to call the Guinness people if we all survive this bathtime. Listen to yet more high-pitched arguing and threaten to take away their reading time before bed. Plan what I’m going to wear to the ceremony when I receive my parenting award.

Supervise the drying off, hair brushing, donning pajamas and brushing teeth process. Just as the last preparations for bedtime are complete, Ad Man walks in. The girls squeal, “Daddy!!!” and run to hug and kiss him like they hadn’t seen him just this morning. Give Ad Man a dirty look, say, “They’re all yours,” go refill my wine glass, and take off my bra. Consider my job complete. Spend the rest of the night zoning out in front of the TV with a computer on my lap, thinking about how I really should be working out instead.