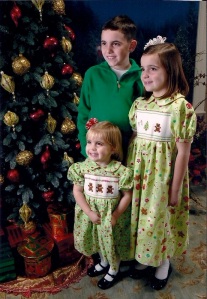 I’m sitting in Starbucks writing and celebrating the fact that I have, once again, survived the yearly elementary school holiday program. Ad Man is somewhere in Pennsylvania attending meetings and freezing his ass off so he’s missed the holiday celebration, yet again, this year.  I know he feels terrible for missing it, but that doesn’t keep me from being bitter. (Hell, if I wasn’t bitter, what would I write about?) Year after year, I’m the lonely mom sitting in the overheated gymnasium, frazzled from getting the kids up and on the bus looking somewhat decent at 7:05 am and managing to make myself presentable–generally by spraying lots of dry shampoo on my greasy roots–so I can get to school early and stake out my spot near the front so my kid doesn’t think I’ve forgotten her and freak the fuck out.

Smalls and the rest of the kindergarteners led a celebration of Chanukah, Christmas, Kwanzaa, Chinese New Year and Las Posadas.  When I was growing up, I didn’t know any Jewish people, let alone the dreidel song!  Today’s holiday program did more than just give lip service to all the many holidays though. The kids learned about the culture and traditions of the diverse groups of people who celebrate each holiday and performed a couple songs from each of them.  It really was a breath of fresh air from the vanilla-white-Christian-only suburb I was raised in outside of Chicago.

Where there is little diversity here, though, is in the way Southerners dress their children for the holidays.  We were eating breakfast this morning, Smalls in her usual uniform of skinny jeans, a paint-stained t-shirt and leopard print Vans when I realized in a panic that she needed something festive for the holiday program or I’d likely be ejected from the PTA.  So, I threw her into a red Crewcuts dress with black polkadots, black tights (miraculously without holes) and sparkly purple shoes. Close enough.

Most of the other kids were all decked out in their holiday finery.  Many siblings were dressed alike, or at least, in coordinating outfits. The typical Christmas uniform for a little girl in the South is a red, green or red-and-green plaid, smocked dress with poufy sleeves.  The smocking is usually adorned with Christmas trees, snowmen, ornaments, Santas or a combination of all of the above.  The more, the better, actually.  In the absence of Christmas iconography, the dress must be monogrammed. In fact, monogram everything!  The outfit is not complete until you add frilly white socks, patent leather mary janes and a monolithic hairbow.

The boys generally wear matching holiday sweater vests or red polo shirts with plaid or khaki pants.  A few really do it up in tiny versions of their daddy’s slacks, starched shirts, sport coats, ties and loafers.  I was just glad Smalls’s hair was kinda brushed, her face was free of chocolate and she wasn’t wearing yesterday’s underwear.

Parents vie for seats at the very front of the gym to get the best view from which to watch their darling children through an upheld iPad. Moms and dads who didn’t manage to set their alarms early in order to beat the rush, worm their way to the front regardless, where they elbow other members of the mom-and-dad-arazzi for a prime spot on the imaginary velvet rope.

There are always a few working moms and dads (but mostly dads) who stand outside, negotiating deals on cell phones while pretending to peer through the smudged gym windows at their children belting out Christmas carols and doing adorable, choreographed arm movements.  These are the ones who will later cross their fingers when they hedge their bets and tell their kid that their favorite part of the performance was “when you sang…um…Jingle Bells?”

I have a soft spot in my heart, though, for the parents who rush in after the program has begun, dressed in week-old jeans and a sweatshirt smeared with spit-up or jelly, dragging along a crying younger sibling.  You can always spot the kids that belong to those parents. They’re the ones with bedhead, rocking a football jersey, pajama bottoms and untied sneakers.  These are my people.

I’ll also accept on my team the “holy-shit-I-thought-the-performance-was-at-10!” mom who you see running down the street carrying the crucial Santa hat that is conspicuously missing from her kid’s head.  You know, as she runs, she’s hyperventilating and calculating how much therapy will be needed before her child is able to trust again.

However, I’ll most likely never be friends with the festive, but tastefully dressed, mom with the perfectly coiffed hair, impeccable nails, diamonds the size of grapes, handsome husband who never travels on important days, and five well-mannered children all in coordinated holiday ensembles.  That is, unless I happen to run into her at my psychiatrist’s office and catch her wild-eyed, clutching to her breast a bouquet of prescriptions even bigger than mine.  In that case, I’ll put an arm around her, assure her that I understand and invite her over for a mid-morning cocktail.

After all, it’s the season of goodwill to all men and women…even the crazies.

2 thoughts on “Wishing You a Fully-Medicated Holiday”