I’d like to bid adieu and good riddance to October, also known as Breast Cancer Awareness Month.  My mother died of breast cancer in the middle of September, 11 years ago.  Every year, shortly after I’ve successfully navigated the crushing blow of the anniversary of her death, I’m faced with a big, pink bomb that explodes everywhere, covering every surface, product and event for 31 looooooong days.

Don’t get me wrong, I’m grateful for all the money raised and the awareness that is spread. Luckily for my daughters and I, breast cancer is no longer considered an embarrassing, somehow shameful disease that’s only whispered about with immediate family members. Dollars raised during the month of October every year go toward funding medical research that has resulted in earlier detection methods and more effective drugs to fight the disease. Women are now fully aware that they should be “feeling their boobies” monthly in order to “save the tatas!”

But, even my mother, while battling the disease, was sick of the “pinkwashing.” Shortly before her death, she told us that she wanted any donations made in her name to go to the Muscular Dystrophy Association, not to breast cancer.  She felt that breast cancer research had plenty of money and that it was time to give other diseases the same attention.  And, that was more than a decade ago!  I can’t imagine what she’d think these days when pink ribbons are as ubiquitous as Kim and Kanye. 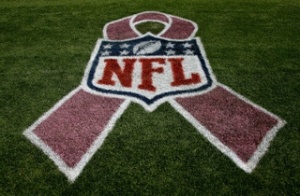 even selfish.  I just need a fucking break already!  Imagine this…you have a loved one who has, sadly, died from being shot in the head with a cannonball.  Communities are up in arms about the number of deaths caused by cannonballs every year, so a month is designated as Cannonball Awareness Month.

Baby blue is chosen to be the color symbolizing the fight against cannonball deaths because, you know, boys mostly use cannons and baby blue is for boys.  Your orange juice has a baby blue ribbon on it saying “Be aware!  Cannonballs kill!”  You go to get your nails done and pick up the special, limited edition nail polish in a lovely shade of baby blue for Cannonball Awareness Month. Professional football teams replace their usual shoes with baby blue ones and paint an enormous baby blue ribbon on their field.

There are countless fundraisers for cannonball awareness.  The nightly news has a special series about the dangers of cannonballs and the anchors interview the tearful relatives of those who lost their lives to cannonball injuries.  You just want to pick up a few things at Target and there are kids’ t-shirts saying “My mommy is a cannonball-to-the-head survivor!”  Your vitamin bottle has a baby blue ribbon on it.  Your Kleenex box bears a lovely pattern of baby blue ribbons.  Your favorite magazine contains articles about people who died of cannonball injuries, inspirational stories of cannonball survivors and tips about how to avoid being hit in the head by a cannonball.

Everywhere you turn, there’s a reminder of your friend or family member whose death is still a raw spot in your heart.  And every single baby blue ribbon makes you sad because you still desperately miss the person who died from being shot in the head with a cannonball.  Maybe they also make you scared because people in your family have a long history of being hit with cannonballs and there’s a good chance it could happen to you.

If I sound bitter, well, that’s because I am.  Can we please start supporting other causes? How about colorectal cancer?  Or Alzheimer’s disease?  Or, at the very least, if we’re going to stick with boobs, can we focus on an aspect of breast cancer that doesn’t get enough press like the number of young women who are diagnosed every year? Consciousness has been raised.  Let’s now focus that consciousness where it’s most needed instead of just painting everything with one enormous, pink brush.

I’m begging now.  Can we all just go back to spending the month of October freaked out by the fact that there are already Christmas decorations on display?!