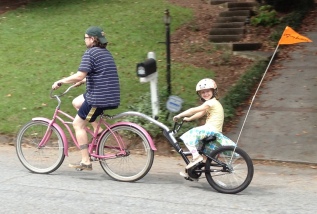 discovered, if I tell Ad Man that I need to work on a blog post, he’ll willingly take the girls out to do something fun-ish and if I say I need somewhere to write, he’ll blow all the leaves off the deck so our house no longer looks abandoned from the back.  I should have started a pretend job long ago!

I have to admit though, for all the shit I give him (usually in a public forum like Facebook), I have an extremely supportive husband.  He’s quick to cheer on any half-assed scheme I present to him.  Like the time I told him I was thinking of making and delivering soups to office buildings after his co-workers made a few comments about his lunches looking delicious.  I mean every office gets sandwich delivery and what’s a sandwich without soup, right?  I soon kicked that plan to the curb though, when I realized the fact that I don’t eat meat and am squeamish about cooking it meant that I would only be able to offer vegetarian soups thereby limiting my potential customer base immensely.  (Prior to giving up meat altogether, I once called my father freaking out while prepping a turkey for Thanksgiving and squealed, “Oh god, what do I do with this, Dad?!  I feel like I’m cooking an INFANT!”)

Of course, Ad Man quickly moves on to leaf-blowing the entire back yard and forgets that we have two children, one of whom is now putting stickers on my face while I attempt to type and the other who is glaring at me from across our filthy outdoor table because I won’t let her watch the Disney Channel for the 17th hour in a row.  And, I suppose that’s one of my biggest gripes about (traditional) motherhood vs. (traditional) fatherhood.  For hours on end, even my comparatively involved and supportive husband has the luxury of forgetting that he is one of only two people on the planet responsible for keeping these two humans alive and preventing them from (fingers crossed) growing into adult psychopaths.

I had a sudden epiphany recently when trying to figure out why, after spending most of the last 7 years yearning for my “lost” career, I was still conflicted about going out and getting a damn job already (as if it were that easy).  I realized, no matter how hard I worked or what amazing job I managed to land, I would never be living the equivalent of Ad Man’s charmed life because of one glaring omission.  I will never have a wife.  Even with the best, most loving nanny possible, I would never have the freedom of knowing that I had someone at home who loved my kids even when they were acting like little assholes and would show up at “work” every single day even when I was out of town and she had strep throat.  (Just a random example, of course.)

And, while that realization still really, really pisses me off, I’m taking steps to try to learn the lesson I’m constantly impressing upon my daughters.  Life isn’t fair.  Suck it up and move on.