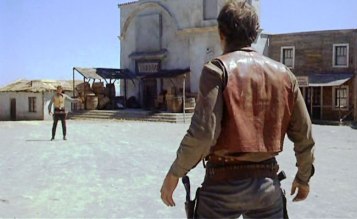 When I was a kid, my family had an RV trailer that we kept at Bear Cave Campgrounds in Buchanan, Michigan. My brother Jeff and I spent much of our summers there waterskiing, catching crawfish in the creek, fishing for Bluegills, sitting around campfires and running wild in a pack of other kids our age. I would often bring my best friend Kathy with me as the boy-to-girl ratio was decidedly heavy on the boys.

One Friday afternoon when I was about nine years old, my family plus Kathy were heading up to Bear Cave from our hometown in the Chicago suburbs but we had to first make a detour to my grandmother’s house in Hammond, Indiana to drop something off. After a quick stop at Nana’s, my dad pulled into a gas station to fuel up our 1974 green Lincoln Continental. My grandmother’s neighborhood was nice, but Hammond is about the midpoint between Chicago and Gary, Indiana, so even at that time, other parts of the city could be sketchy.

My dad got out of the car to pump gas, my mom sat in the passenger seat and we kids stretched out in the backseat while Kathy talked. My parents referred to my best friend as “Chatty Kathy” for good reason. She could talk nonstop from Lansing, Illinois to Buchanan, Michigan without so much as a prolonged pause. The Lincoln was like a living room on wheels though, so there was a good four foot buffer (but sadly for my parents no soundproof barrier) between Mom and Dad in the front seat and the backseat where we kids kept our mobile entertainment station stocked with snacks, books, Smurf figurines, melted crayons and MadLibs.

Kathy continued her monologue as my dad moved the car to the air pump in front of the garage. He was outside filling the tires and minding his own business, or at least that’s what we thought he was doing, when suddenly he tore open the front door of the Lincoln, yelled at us to “Get down!” and grabbed his gun out from under the floor mat.

I should point out here that my dad is a retired police officer. Dad was a cop in my hometown for twenty years. His career highlights included being “Officer Friendly” in the elementary schools in town (including mine) and arresting my friends and classmates for various infractions. Luckily for me, by the time I got to high school, he was a detective and no longer on party-busting duty. That he never had to arrest my brother for doing something stupid is a miracle of weeping-Virgin-Mary-statue proportions.

So, the fact that my dad was packing heat was no surprise to any of us. My brother and I spent much of our formative years at the police gun range and my father was rarely without his trusty sidearm. However, it wasn’t every day that Dad whipped out a loaded gun and told us to duck. Kathy, Jeff and I wisely hit the deck while my mom peeked over the back of her seat trying to figure out what the hell was going on. That’s when the gunfire started. I remember the next few minutes in slow motion. I began crying and begged my mom to get down, Jeff stared wide-eyed, frozen in place and even Kathy was rendered silent.

The three of us freaked the hell out when, despite the wailing police sirens that had joined in adding to the panic, we could clearly hear bullets ricocheting around in the mechanics’ bay just feet from where we cowered in the car. My mother finally saw the error of her ways and joined us on the floor, so by then, none of us could see where my dad was. My crying turned to screaming as I envisioned my father lying in a pool of his own blood. Even at that age, I was a glass-half-empty kind of girl.

Then, just as quickly as the craziness had begun, it was all over. After a half a minute of silence, we dared to inch our heads over the car seats and were able to confirm that my father was still in an upright and undamaged condition. Dad stuck his head in the car door, said everything was OK, and went to talk to one of the handful of Hammond police officers who’d appeared on the scene. Those of us in the car remained baffled as to what just happened and I downshifted from screaming to crying once again, this time, because I was sure this whole shootout thing meant we wouldn’t be going to Michigan for the weekend after all. 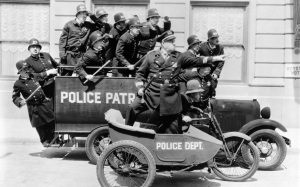 However, after just a few minutes of chatting with the Hammond cops, Dad hopped in the car, tucked his gun back into its cozy hiding spot and we were on our way. This time, my dad was the one with the story to tell. As it turned out, two guys broke into an old lady’s house in Gary, Indiana, robbed her, and stole her car. Dad spotted a police car heading toward the gas station in Hammond in hot pursuit of a car whose inhabitants were speeding with guns drawn. Dad, of course, figured the cops could use some backup. As an adult, I’ve often questioned his sanity at that moment.

The bad guys started shooting at the cops, bullets missing their intended target, and instead whizzing past our car and bouncing around in the mechanic’s bay like a macabre pinball game. The cops shot back at the guys in the car (I’d like to point out that this was a fairly busy day with many people out walking and driving), and my dad shot at the stolen car’s tires, eventually blowing out two of them and stopping the bad guys a ways down the road where they wisely surrendered and were arrested.

After all the cops-and-robbers excitement was over, Dad asked the Hammond police what kind of paperwork they would need him to fill out. Apparently, in my hometown, if an officer discharged his weapon, he’d be required to fill out piles of paperwork. But the Hammond police just shook Dad’s hand, thanked him for his help and said he could pop into the station sometime the following week to give a short statement. No biggie. There was no need to let a pesky gunfight ruin our fun weekend.

As you can imagine, we were the stars of the campfire that night regaling the crowd with our shoot-’em-up adventure story. The incident is, of course, seared permanently in my brain, but it’s funny the things that occur to me now that I’m around the age my parents were at that time. (Older, actually. Lord help me.)

As a parent myself now, I can’t imagine the conversation my mom must’ve had with Kathy’s mother when we finally arrived safe and sound at Bear Cave Campgrounds and tracked down a pay phone (remember those?). “Um, hi Barb…this is Anne. We had a little incident on our drive to Michigan and I thought you should know about it. Everyone is OK, but…” That’s one parenting moment I’m glad I’ll never have to experience!